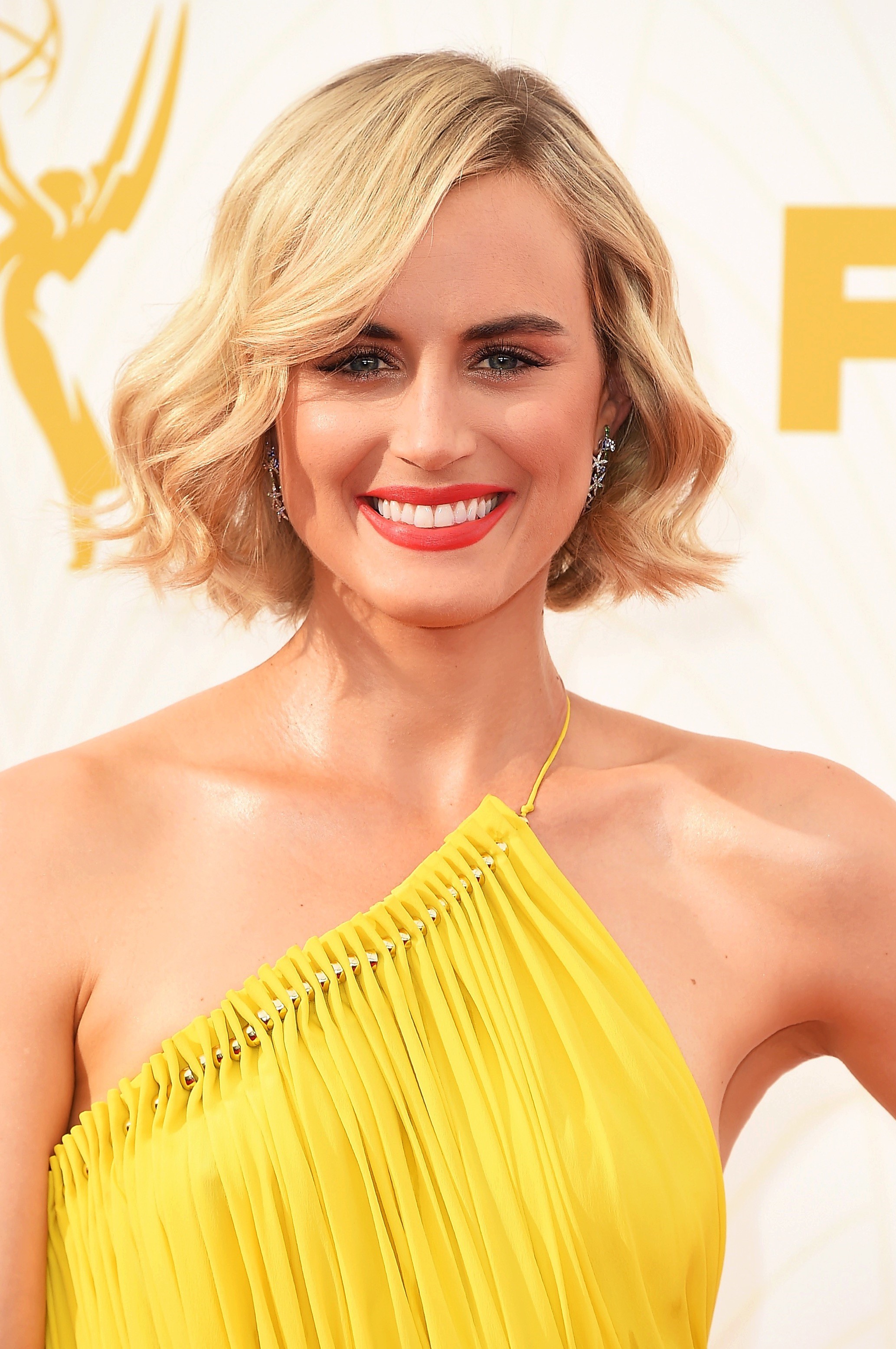 Apparently yellow is the new black! (Sorry, couldn’t help myself.)

Tonight at the Emmys, Orange Is The New Black star Taylor Schilling stunned on the red carpet in a yellow Stella McCartney dress. Her fresh frock called for a modern bohemian glamour look created by makeup artist Hung Vanngo.

Here are a few key steps that makeup artist Hung Vanngo used to create the look: 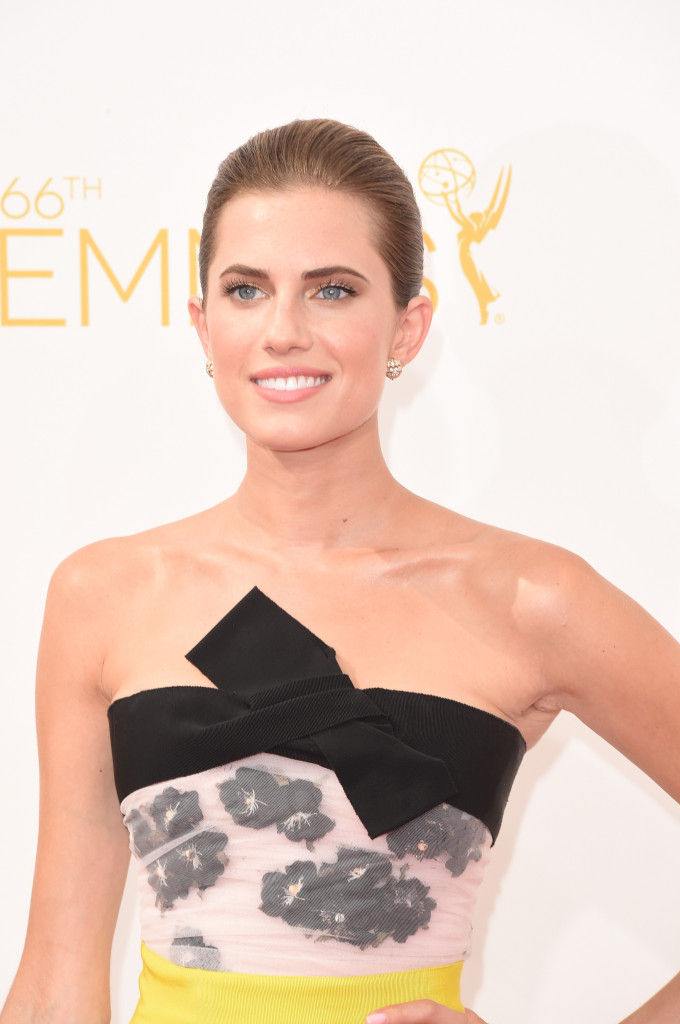 Like many of you out there, I live for awards season. I also live for finding out the beauty products that help make our favorite celebs look so darn pretty on the red carpet.

It’s no secret that I have an extreme crush on Brian Williams (he waved at me once – true story), so naturally I adore his daughter too. I thought she killed it last night at the Primetime Emmy Awards. Her glowing Emmy look was thanks in part to celeb makeup artist Pati Dubroff (and also thanks in part to the killer bone structure she received from her dad.) I got the scoop from Pati about the products and techniques she used to achieve this beautiful look.

“Allison had just returned from her summer vacation so her skin was sun-kissed,” she said. “We decided to go with a soft look. I dubbed this ‘pretty in pink with a flash’ – the pink is on the lid, the cheek and the lip, while the flash is a dash of bright yellow gold on the inner corner of her eyes which complimented the bright yellow grosgrain belt on her dress.” 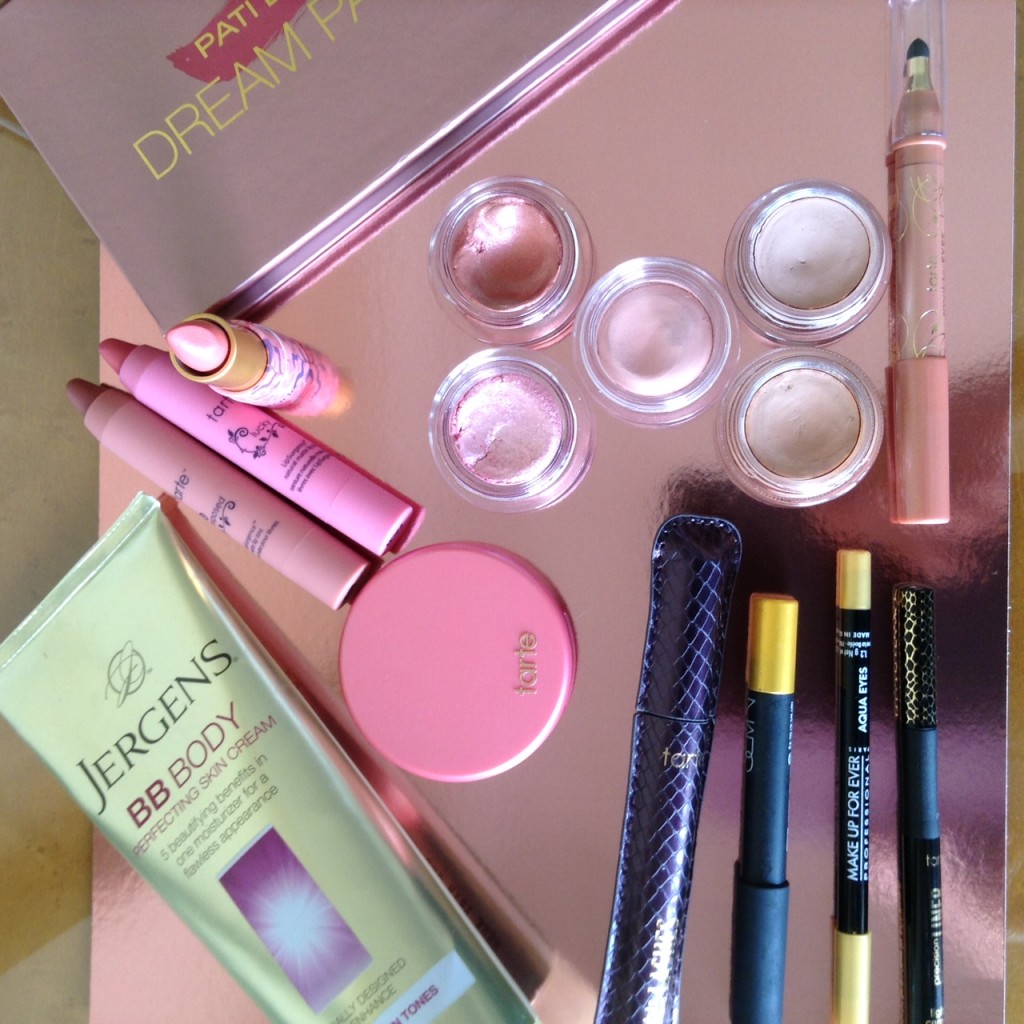 Pati prepped the skin with tarte clean slate timeless smoothing primer in the t-zone to eliminate the need for powder. She then used a small amount of tarte Amazonian clay 12-hour full coverage foundation SPF 15 in light medium honey.

“I wanted the sheer coverage so Allison’s freckles could show through,” said Pati.

She finished the skin using tarte park avenue princess bronzer to amp up the tan and tarte Amazonian clay 12-hour blush in fearless on the apples of the cheeks for a pinky flush.

She defined her brows with tarte the brow architect brow shaper, liner and definer in medium-tan.

“I created the structured eyes with Pati Dubroff dream palette using ochre and raw to give matte structure and a soft tone in the crease and under the eye,” said Pati.

She then applied tarte smolderEYES Amazonian clay waterproof liner in golden beige in the center of the lid for a peachy pink base followed by Chanel Illusion D’ombre in Abstraction on top. On the inner corner of the eyes, Pati added a flash of NARS Soft Touch Shadow Pencil in Corcovado for a flash of bright yellow. At the base of the lash line Pati used tarte lights, camera, lashes precision longwear liquid eyeliner – with a touch of a light flick at the outer corner. She completed Allison’s eyes by coating the lashes in tarte lights, camera, lashes 4-in-1 mascara.

Allison’s Gambattista Valli Couture sleeveless dress meant her body was on display too. Sometimes it’s easy to focus on the face and forget the rest of the skin, but Pati made sure she was glowing from head to toe!

“It’s just as important to make sure that the skin on her body looks as just as flawless as the skin on her face,” said Pati. “I used Jergens BB Body Skin Perfecting Cream in Medium to give a subtle radiant sheen and illuminate Allison’s skin.”

Allison packed her clutch full of the essentials to keep her look fresh all night! She selected tarte not so slick oil-absorbing blotting papers and the two tarte lippies Pati applied to keep on hand. Smart girl! 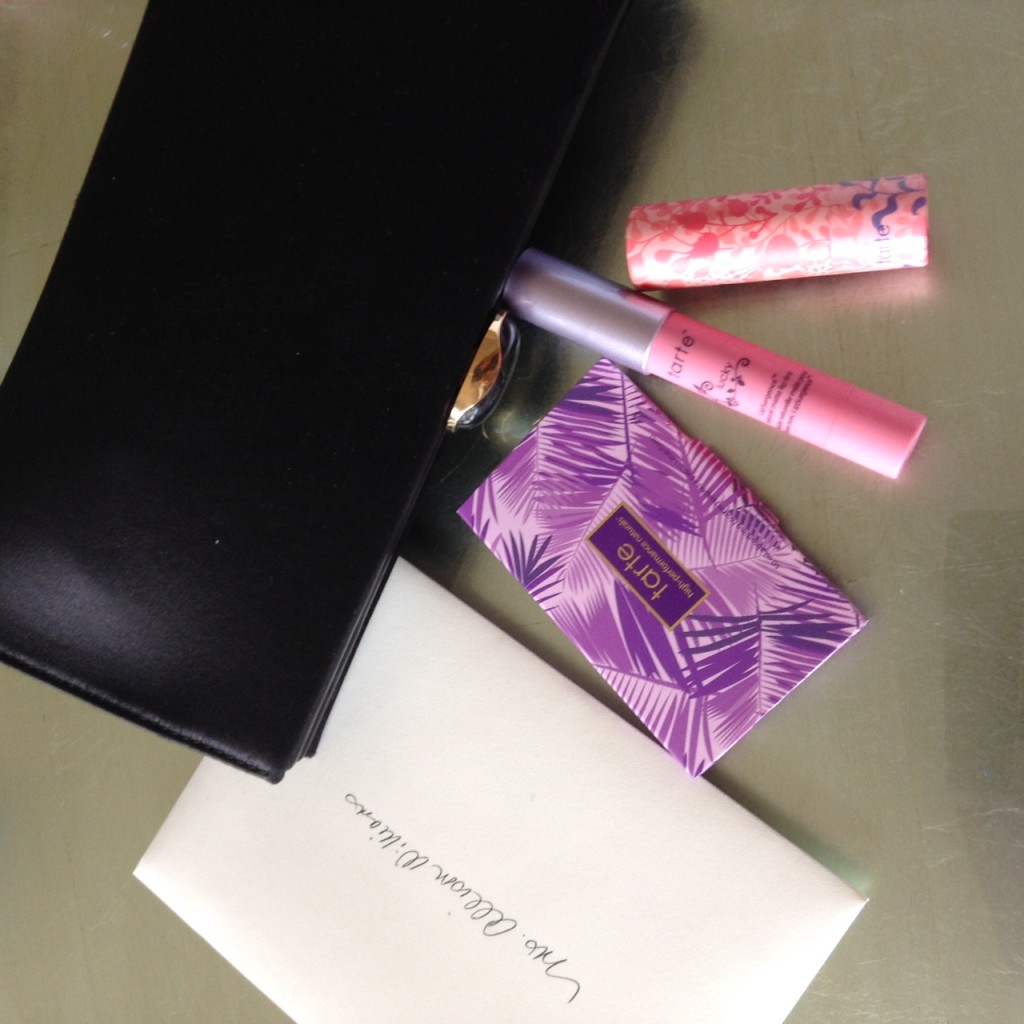 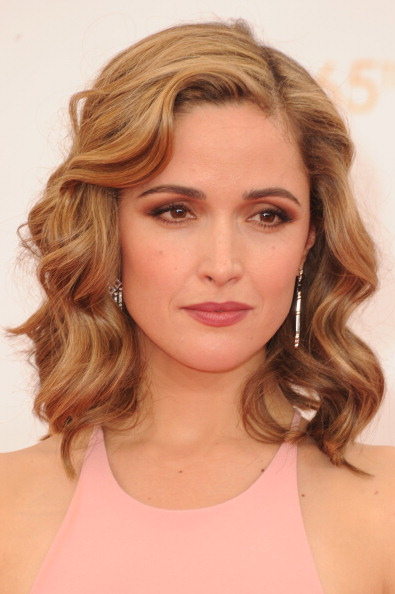 One thing is for sure – glam waves were prevalent on the Emmys Red Carpet last night. Allison Williams, Christina Hendricks, and Taylor Schilling all wore wavy ‘dos, but my fav waves of the night were Rose Byrne’s. The Insidious star owned this soft romantic look, created by John Frieda International Creative Consultant Harry Josh.

Inspired by an image of Bianca Jagger from the late 70’s/early 80’s, Josh gave Rose Byrne a modern and polished version of the wild waves. Read on to find out out to copy her coif! 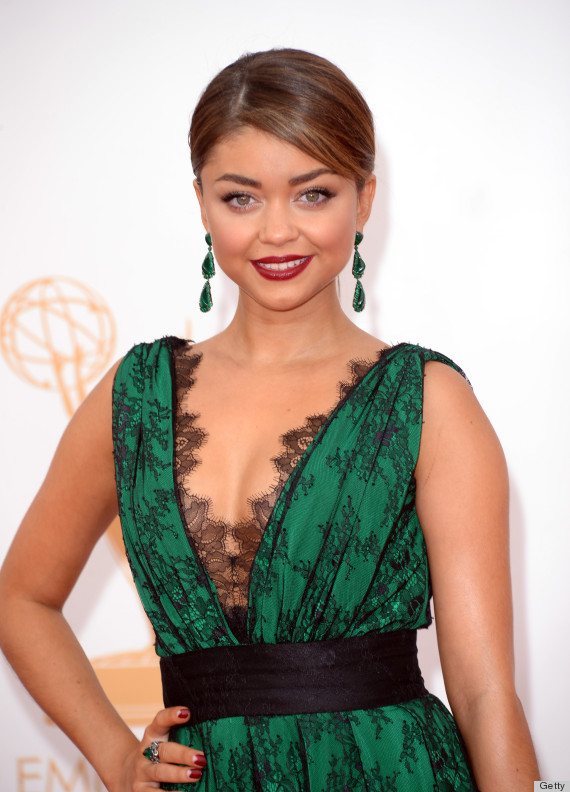 I dig the nail art that young Modern Family beauty Sarah Hyland was rocking on her fingertips. (She was also wearing the heck out of a wine hued lip and killer green gown.) She opted for a “negative space” look—having a natural or bare area of nail exposed somewhere between/within the polished area instead of a two-toned manicure. Celebrity Manicurist Christina Aviles used Red Carpet Manicure’s LED gel polish in “Haute Couture,” “Runway Red” and “Camera Shy” to design her nail look.

“Sarah co-designed her dress with Carolina Herrera and wanted to complement her dress with burgundy nails,” said Christina. “Once we sat down together, she let me know she really wanted to do something eye catching and art deco.” 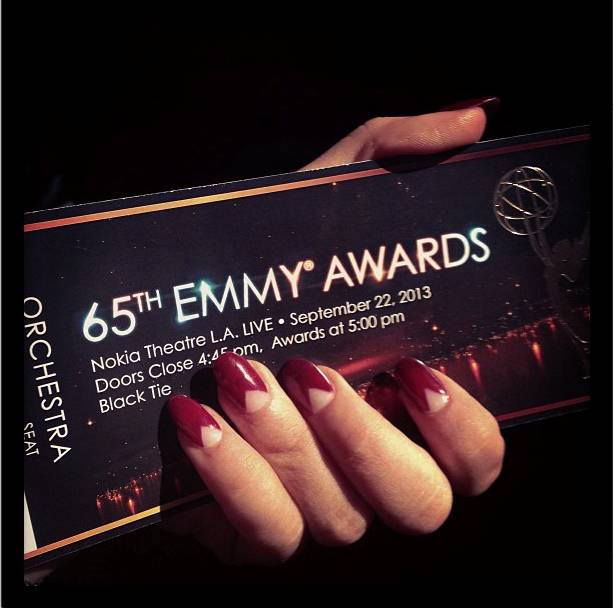